Home > Tutorials > Your first environment on AWS
view all results

Your first environment on AWS

Up until now, our tutorial content has been been primarily using contrived examples to enable folks to get up to speed with some of the more fundamental SweetOps concepts and tools. This tutorial will be a bit different in that we’ll actually get something deployed to your AWS account so you can see how SweetOps works in a more concrete way.

To accomplish this tutorial, you’ll need the following:

Let’s clone it to your local machine and cd into it:

Now that we’ve got our code, we’re going to want to interact with it using our standard set of tools. Following the SweetOps methodology, we’re going to do so using a docker toolbox, which is a Docker image built on top of Geodesic. This entire tutorials repository is actually Dockerized to make that part easy, so let’s build and run our cloudposse/tutorials image:

This will build the tutorials image locally on your machine and then runs it while also mounting the various tutorial folders so you can edit them on your host machine or in the container and the changes will propogate either direction.

Now that we’re running inside of our container, let’s start a new shell as your AWS profile and get into our specific tutorial directory:

This 03-first-aws-environment/ directory that you’re now in should be looking a little bit familiar from our first tutorial:

Cool, let’s jump into our next step and actually do something with this small project.

2. Build and generate our tfstate-backend for this project

In our last tutorial, we showed atmos being used to apply some fairly simple terraform projects that didn’t actually create any resources in the cloud. For this tutorial however, we’re going to be creating a simple static site in AWS and as part of that we should be sure to follow one of the most important best practices in terraform: Use remote state. Luckily, atmos and stacks make that easy on us by providing a simple abstraction layer to configure all our terraform components with a single backend config. In this example we’ll be using the S3 backend and the tfstate-backend component to automate the resources we need for that backend, so let’s dive into that:

This should update most of our stack and catalog files to now include uniquely generated names.

This will provision our S3 bucket + Dynamo DB table for usage as our backend.

This will look at our stack, find the imported terraform.backend.s3 configuration and build a valid backend.tf.json file and put it in our component directory. Then going forward, whenver we plan or apply against that component it will be properly configured to use that S3 backend.

This will prompt you with the following:

Enter “yes” and this will migrate our local state to our S3 backend. Success!

Exactly the same as for our tfstate-backend component, our atmos backend generate command will put a backend.tf.json file in our components/terraform/static-site/ directory so that component will always utilize the correct backend. If this were a real project that we were working on and practicing proper GitOps, then we’d actually check those files into git so that our backend configuration would persist going forward, but since this is a tutorial we’ll skip that step.

Next, let’s move onto applying our static-site component to actually build something real on AWS. Well that’s pretty simple actually:

This command will plan and apply our static-site component with our configuration specified in our stacks/uw2-dev.yaml stack. This should output something similar to the following at the end:

If you copy the domain_name value and paste it into your browser then you should see our simple static site! 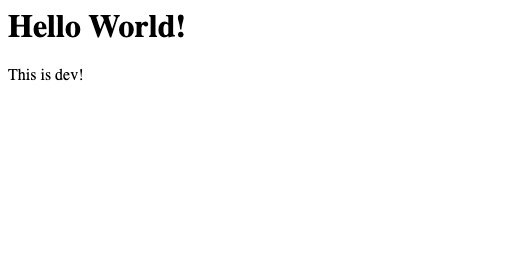 In this tutorial, we’ve given you a bit more of taste of what it looks like to work on a real project while following the SweetOps methodology:

With this knowledge, you’re now ready to actually build projects on AWS using the SweetOps methodology!